Day was (and I won’t name that day, lest I end up with an expiration date stamped on my forehead) that if a book featured cowboys and Indians, it was a WESTERN.

Unless said cowboy fell in love with a beautiful Indian princess, then we had a LOVE STORY.

Then a cowpoke fell for another cowpoke.

With the explosion of genres on the writing scene, perhaps the time has come for a GENRE CZAR; someone to categorize all books, genre-wise.

But wait! We already do have that czar…sort of. Amazon wants tag words to categorize a book so those looking for your genre can find you. Great idea, but what IS your genre? And how do your readers, some of whom might not even know they’ll like your book because it doesn’t fit nicely into a particular genre, find you? 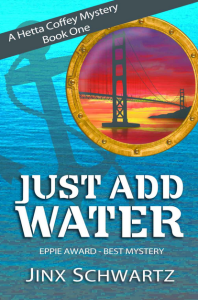 Take my Hetta Coffey series as an example. First in the series, Just Add Water, won the EPPIE AWARD for BEST MYSTERY.

Great! But is it really a mystery?

Okay, so there is some mystery, but the words “humorous” and “light” need to get plugged into that description, unless I want disgruntled reviewers (as one did) grousing that it isn’t much of a mystery. So now we have a HUMOROUS MYSTERY, featuring a woman with an unusual career, a snarky attitude, and a lousy love life who is looking for a man in all the wrong places. In her case, countries.

Well, it could be:

ROMCOM (romantic comedy): Sort of…there is both romance and humor.

But wait! Those two genres are sure to send men running in the other direction, and I want men to read my books. Those who do love Hetta Coffey’s fierce independence and irreverent attitude, so I don’t want to scare them off.

So, how about NAUTICAL ADVENTURE? The men are back, but their wives and gal friends are thinking: Clive Cussler. Again, not bad company, but runs the risk genre-bending the truth, although Just Add Salt, book two in the series is definitely an adventure at sea.

So how do you warn (or entice) readers who might like the book, but don’t know it yet because it doesn’t fit neatly into a genre category?

What do you think?